It’s amazing to look back to the beginning of our Centennial Celebrations and see all that has taken place so far!

Centennial Quilt Raffle – the beautiful commemorative “Card Tricks pattern” quilt made by Joan Emswiler of Blakeslee was raffled off on January 4, 2009, and won by Don Mattise of New Hampshire. Congratulations, Don!

The Centennial Raffle was held on March 29th – first prize – a diamond solitaire necklace was won by Ruthann Lasichak; 2nd prize – a lap quilt was won by Thomas Grancey, and third prize – a chicken scratch pillow was won by Peg Petrilak.  Congratulations to the winners!

The Spirit of Orthodoxy in Alaska CD’s and jewelry made by Kathy Savo are still available in our display cases downstairs.

We’ll have another raffle beginning on May 10th.  Prizes are:  a pearl necklace and watch, emerald & diamond earrings, & a quilt.

A group of choir members and others went Christmas caroling on December 28th!  People in the Lackawanna County Health Care Facility were visited along with Mary Zielinski, Rose Kelechawa and Nick Mattise.  The carolers were warmly received and brought much Christmas spirit to many people.

On Sunday, January 4, 2009, we had the blessing of the 100th Anniversary banner.  It looks wonderful and will serve as a constant reminder of the many years that St. Michael’s Church has been in existence and has served the faithful Orthodox worshippers in Jermyn.

We had a wonderful day to travel to the lovely Lancaster area to see the Easter show "Behold the Lamb" at the Millennium Theatre.   There were many rousing games of Bingo, with Easter theme prizes awarded to the winners.  Anyone who didn't win was given a lottery ticket.  We stopped off at the Hershey Farm Restaurant where we could have a meal or browse the shops.  There were wonderful seats at the theatre and the show was spellbinding.  You felt as if you were back in Biblical times, actually seeing the crucifixion and resurrection of our Lord and Savior.  The resurrection scene was particularly touching as the Lord sat on the throne of glory after freeing us from the bondage of Hell.  Dinner at the Good 'N Plenty Restaurant was surely good and plentiful.  There were more shops available and then it was time to depart.  On the ride home, there was a 50/50 plus.  It was a wonderful, filling, and awe-inspiring day.

On Sunday, May 3, 2009, St. Michael’s Orthodox Church in Jermyn, PA hosted an internationally known speaker, Fr. Peter Gillquist from California.  He spoke on “Finding the church of the New Testament”.  Along with his talk in Jermyn, he was also scheduled to speak in Philadelphia, Harrisburg and Berwick.

Some of Fr. Gillquist’s noted accomplishments are that he addressed the International World Council of Churches in Ethiopia and he helped lead a nationwide group of 2000 evangelical Protestants to the Orthodox Church in 1987.  He has spoken internationally on the Orthodox faith and was a guest of the Romanian church, where he was heard by tens of thousands.  Fr. Gillquist is head of the Missions & Evangelism for the Antiochian Orthodox Christian Archdioceses.  He was the development director to the Orthodox Study Bible project, which is now on the Best Seller’s List and he authored a book on Johnny Cash.

Everyone found him to be very personable and a captivating speaker.

The Centennial Committee would like to take this opportunity to wish all mothers a wonderful Mothers’ Day!

Transfiguration of our Lord and Savior Jesus Christ 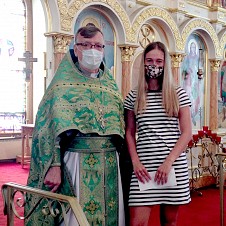