The Ladder of Divine Ascent for Us Today, adapted from an article by Fr. Steven Kostoff

During Great Lent, we commemorate the saint and writer, John Climacus (of the Ladder). Saint John, who fell asleep in the Lord in the mid-seventh century, was the abbot of an ancient monastery on the Sinai Peninsula. He wrote what may be the classic work of our spiritual tradition: The Ladder of Divine Ascent.He provides an example through his spiritual classic – something to keep in mind as our lenten efforts may start to sag at this point.

There is no doubt that Saint John is writing as a monastic. But Metropolitan Kallistos Ware said: “It has in fact been read with the utmost profit by many thousands of married Christians… Whether monastic or married, all the baptized are responding to the same Gospel call; the outward conditions of their response may vary, but the path is essentially one.”

The Ladder is made up of Steps in which Saint John analyzes the most troubling “passions,” and offers guidance as to how to overcome them and replace them with a corresponding virtue. One way of many to describe a major component of the spiritual life is to say that it is a “warfare against the passions.” Without success in this battle, we cannot hope to attain purity of heart. As Metropolitan Kallistos summarizes the contents of The Ladder, the “passions” include:

GLUTTONY: “Gluttony is hypocrisy of the stomach. Filled, it moans about scarcity; stuffed, and crammed, it wails about hunger” (STEP 14).

ANGER: “Anger is an indication of concealed hatred, of grievance nursed. Anger is the wish to harm someone who has provoked you” (STEP 8).

SLANDER [i.e. malicious gossip]: “Slander is the offspring of hatred, a subtle and yet crass disease, a leech in hiding and escaping notice, wasting and draining away the lifeblood of love” (STEP 10).

TALKATIVENESS [i.e. “idle talk”]: “It is hard to keep water in without a dike. But it is harder still to hold in one’s tongue” (STEP 11).

FALSEHOOD: “Lying is the destruction of charity, and perjury the very denial of God” (STEP 12).

DESPONDENCY: “Tedium is a paralysis of the soul, neglect of religious exercises … laziness … weakness in prayer” (STEP 13).

INSENSITIVITY: “Detachment he praises, and he shamelessly fights over a rag [i.e. trivial things]” (STEP 18-20).

VAINGLORY: “A vainglorious person is a believer [but]… Apparently honoring God, he actually is out to please not God, but men” (STEP 22).

PRIDE: “Most of the proud never really discover their true selves.They think they have conquered their passions and they find out how poor they really are only after they die” (STEP 23).

Saint John also wrote of the VIRTUES that we are to “acquire” by the grace of God, so that we recover and restore our human nature by becoming what we were meant to be – vessels of the virtues that come from God, gifts of the Holy Spirit present within us. This is hard work. But it sets us apart as both rational and spiritual beings, created “according to the image and likeness of God.”

PENITENCE: “Repentance is the daughter of hope and the refusal to despair. (The penitent stands guilty, but undisgraced.) It is the purification of conscience” (STEP 5).

SORROW: “joyful sorrow of holy compunction”* (STEP 7). Saint John created the term “joy-creating sorrow.” We experience “sorrow” when we acknowledge our sinfulness and estrangement from God, but it becomes “joyful sorrow” through repentance and an awareness of the forgiving nature of God.

* Metropolitan Hilarion Alfeyev defines compunction as “what happens to many people during prayer … suddenly one feels a kind of enlightenment, lightening, and tears. In church language this condition is called compunction. ”

SIMPLICITY: “Simplicity is an enduring habit within a soul that has grown impervious to evil thoughts” (STEP 24).

HUMILITY: “The man with humility… will be gentle, kind, inclined to compunction, sympathetic, calm in every situation, inoffensive, alert and active” (STEP 25).

DISCERNMENT: “Discernment is… understanding of the will of God in all times, in all places, in all things, and it is found among those who are pure in heart, in body and in speech” (STEP 26).

STILLNESS: “Stillness of soul is the accurate knowledge of one’s thoughts” (STEP 27).

PRAYER: “Future gladness, wellspring of virtues, source of grace, food of the soul … an axe against despair, hope demonstrated” (STEP 28).

DISPASSION: “a heaven of the mind within the heart, which regards the artifice [trickery] of demons as a contemptible joke” (STEP 29).

LOVE: “Love, by its nature, is a resemblance to God, insofar as this is humanly possible. … Love is the banishment of every sort of contrariness, for love thinks no evil” (STEP 30).

The Ladder of Divine Ascent through victory over the passions and the acquisition of the virtues is our goal during Great Lent – and throughout our entire lives. Saint John closed with the following exhortation: “Ascend… ascend eagerly. ‘Let us hurry until we arrive at the unity of faith and of the knowledge of God’ [Ephesians 4:13]”

Father Steven Kostoff is rector of Christ the Savior-Holy Spirit Church, Cincinnati, Ohio. He is also a member of the adjunct faculty of the theology department at Xavier University in Cincinnati, where he has taught various courses on Orthodox theology. 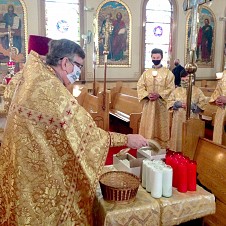